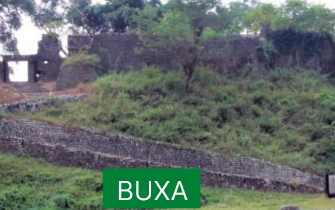 Because of its favourable climate and topography, it has around 1000 floral species including orchids variety of over 100 species and some rare medicinal plants. The area of forest is habitated by Tribe such ans Rava, Garo, Mechia, Modesia, Nepali and Bhutia, who work mostly as farmers or tea garden labourers.

Santrabari is the starting point of your trek to Buxa Fort and Lapchakha. From here your 4 km trek to Buxa Fort starts. This trek is through dense forest, hills and picturesque surroundings and leads one upto the Buxaduar Forest Bungalow. This place is a haven for nature lovers, bird watchers and Trekkers. Buxaduars is, in fact, famous for its prison fort. This fort was used as a Detention Camp by the British, because of its remoteness during the Indian Freedom Movement. Many freedom fighters were imprisoned here. However, after independence, it served as a refugee camp for Tibetans and Bangladeshis. The fort is in ruins at present, but its historical significance is hard to miss once you are there. Buxa Heritage Museum and the Nature Interpretation Centre are other places of attraction.

RAJABHATKHAWA -- Rajabhatkawa is located around 15 km from Alipurduar and is popular among tourists for its centres for Nature Interpretation, Vulture Breeding, and Forestry Training, It is 65 km from Madarihat and is the entry point to Buxa and is also connected by road to the border town of Phuntosoling (35 Km) in Bhutan. There is a forest check post here which provides entry permit to the Reserve.

You can also embark on a jungle safari inside the park  with a guide from the forest check post at Jainti.