Upon arrival at the railway station/airport, you are received and driven to your hotel/resort at Lataguri. This place is close to the Garumara National Park. We prefer to put up our guests in hotels/resorts which give you a feeling of being either in the forest or in a tea garden. Late in the afternoon, we take you to get a feel of the Forest.

Depending upon the availability of tickets/entry passes, we would take you to any one of the following watchtowers at: Jatraprasad (Evening trip accompanied with tribal dance) Medla Chukchuki, or Jungle Safari which includes a visit to the Mahakal water reservoir. Overnight at Lataguri Hotel/resort 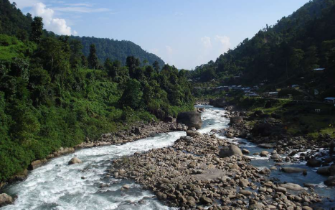 After breakfast, we take you for an excursion to Samsing & Sunthalekhola. Samsing is a tea estate in the Dooars and a small locality of about 100 houses surrounding the tea gardens. On the top of the hill there is a beautiful Guesthouse. The silence of the place is disturbed only by the noise of the gurgling river Murti, which flows about half a kilometer below. The drive to Samsing is through lush green tea gardens and the descending mist on the tea gardens during the monsoons is a sight to behold. It is a great spot to watch birds. Suntalekhola or Suntaley Khola (also Suntaleykhola) is a small village and a tourist spot in the Darjeeling District of West Bengal.

The altitude of the place ranges from 650 to 950 m. It gets its name from a small stream: Suntaley Khola. In Nepali, Suntaley means orange and khola means stream. This place is nearly 5 km from Samsing. The green patch on the left side of the way to Suntalekhola is amazing and holds many rarities of birds and butterflies.

After you return from the trip, late in the afternoon, we take you for a visit of a watchtower in the forest. Depending upon the availability of tickets/entry passes, we would take you to any one of the following watchtowers at: Jatraprasad (Evening trip accompanied with tribal dance) Medla Chukchuki, or Jungle Safari which includes a visit to the Mahakal water reservoir. Overnight at Lataguri Hotel/resort 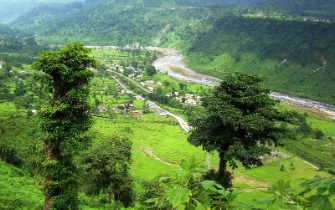 Today we would take you for an excursion to Murti, Jhalong and Bindu. Murti is a small village by the side of the Murti River. It is an ideal picnic spot where one can enjoy the scenic beauty. Lucky ones can even catch a glimpse of elephants and other animals by the side of Murti River when they come to drink water. Jhalong is situated on the bank of the river Jaldhaka on the Indo-Bhutan border.

It lies at the foothills of the Himalayas, on the way to Bindu in Kalimpong sub-division. Jaldhaka Hydro Electricity Project on Jaldhaka River is a major attraction in this area. Bird lovers can enjoy a varied collection of hill birds as well as migratory water fowls here. Bindu is the last village of West Bengal before one enters Bhutan. It is a beautiful valley on the bank of the river Jaladhaka. This river serves as a natural physical boundary separating West Bengal and Bhutan. Bindu is also famous for its cardamom plantations. Visit to this place is an experience worth remembering. Return in the afternoon and visit the "Nature Interpretation Center", which gives information about the flora and fauna of the Dooars area. 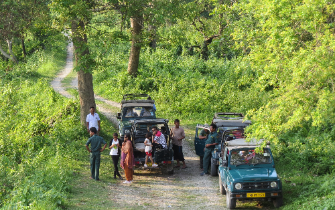 A leopard safari (Optional), the only one of its kind in India, can also be availed in South Khayerbari Eco Park. Thereafter you proceed towards Jaldapara Wildlife sanctuary. Declared a wildlife sanctuary in 1991, for the protection of the Indian one-horned rhino, Jaldapara is situated in the foothills of the eastern Himalayas. The river Torsha flows through this rain forest sanctuary which is mostly covered with tall grasses.

The sanctuary encompasses luxuriant vegetation and a rich variety of wildlife. The Malangi River also flows nearby from east to west. Riding elephants is the only way to move inside this forest and Visiting time is 9A.M. to 4 p.m. The forest is mainly of Savanna Type covered with tall elephant grasses. The main attraction of the sanctuary is Asiatic one-horned rhinoceros. The sanctuary holds the highest rhino population in India after Kaziranga National Park in Assam.

The other animals found are tigers, elephants, deers, sambhar, barking deer, spotted deer, hog deer, wild pig and bisons. Jaldapara is a paradise for bird watchers. It is one of the very few places in India, where the Bengal Florican is sighted. The other birds to be found here are the crested eagle, Pallas's fishing eagle and shikra, besides jungle fowl, peafowl, patridges, and lesser pied hornbill. Python, monitor lizards, kraits, cobras, geckos and about 8 species of fresh water turtles have also been found in the sanctuary here. A thrilling elephant safari is organized in the early morning from Hollong to offer the exquisite beauty of the vast grassland of Jaldapara. You can also enjoy the jeep safari (Optional) inside the sanctuary which is another main attraction. 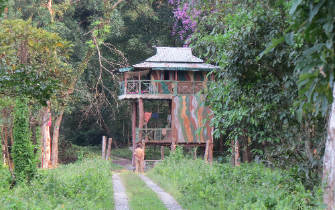 Depending upon the availability of tickets/entry passes, we take you in the morning to any one of the following watchtowers at: Jatraprasad (Evening trip accompanied with tribal dance) Medla Chukchuki, or Jungle Safari which includes a visit to the Mahakal water reservoir Rest of the day is free for leisure. Drop to airport/railway station for onward journey.